As it’s Father’s day I decided to write to you; we didn’t get to talk much in the four years that our lives overlapped. As you’re no longer with us I doubt you’ll see these words, but I want to say them anyway.

First of all I want to thank you for providing some of my raw material. I appreciate the opportunity of being here now and am working hard to use it wisely. You live on in some way through your children and the memories you created with your friends and family.

I am sorry, and sad, that your depression made you feel the world would be better off without you. It isn’t. I wish that you had been able to share what you were feeling, and be able to ask for help.

It’s been tough on Mum too. Her early life was hard growing up in East London during the war. And she probably expected that your marriage would turn out differently.

And your brother and sisters, mum and dad. Your friends. We all miss you.

We don’t talk much about what happened. It’s painful. I think it will be easier the more we do it.

Our junior school headmaster suggested that we try applying to Christ’s Hospital for [my eldest brother]. Hundreds of letters from Mum later we were all studying there. I was sponsored by a Governess, Mrs. Barnes who was successful in her job, but her parents’ relationship wasn’t straightforward. She died from lung cancer soon after I finished university. I regret not getting to know her better. With a number of others from my year group I’m now supporting a girl at CH who’s finishing her second year.

Christ’s Hospital was set up by Edward VI in London to care for fatherless and poor children. I enjoyed the freedom, the education was mostly good, and it gave me the chance to try different sports and develop musically. It also made me independent, and even now I’m inclined to figure stuff out by myself although I’m getting better at asking for help.

The school had a computer room and I wrote a programme when I was 16 which won some money for the school in a competition. I’ve worked with computers ever since. Generally I enjoy it … solving problems. For me it’s really about what you can do with it, and the positive impact of the things we create.

It took 22 years, but the two sides of the family are in contact again, which makes me very happy. Your brother and sisters are very loving. When I made the call to [my aunt in Cheshire] it turned out that my cousin lived just up the road in north London. We spent the evening drinking wine and catching up. The last time I saw her was in Canada when we were over visiting Grandma just after you died.

Your absence has made me more curious about the family and so I’ve done some research. Your grandfather’s dad moved from Staffordshire; it turns out that a branch of the family in Staffordshire were foundry owners early in the industrial revolution. Your grandfather saw the decline of the coal mining industry and so it made sense for your dad and you to become chemists. We’re going through another “revolution” now where half of the world’s population (~ 3.5 billion people) have access to so much information (not all of it correct). And we have ways to keep in touch with each other – even see each other (like television) – when we’re thousands of miles apart.

Now we have to make a conscious effort to disconnect so that we can really pay attention to those who are important to us, like our family. This can be difficult, because technology companies design their products so that we want to keep using them so they can sell more advertising.

I believe we learn by example from our parents, continuing the things that work and changing those that don’t. These are the things I’ve learned from you:

This picture makes me think about you, and reminds me of the father that I’m working hard to be for my children. 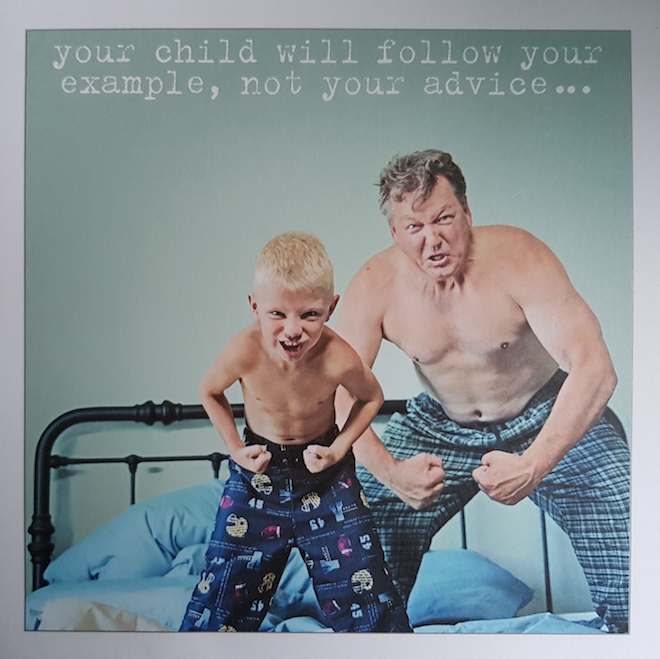