After another tortuous journey courtesy of Thameslink I arrived at 8.30. Having had a chance to think over our approach I felt more comfortable that we were on the right track with the SMS / Chatbot interface. Met Justin soon after I arrived.

I got to work building a web application that would take messages from an SMS gateway and send them to the app for saving in Amazon S3. Viv and Van joined us, and worked on the presentation and project submission. Stella was sick so couldn’t join us.

The deadline for code freeze and project submission was 1pm. I had a simple app running on Fargate but didn’t complete the SMS integration. So we went with the pieces we had, which were the chatbot and image search.

At 1pm we watched England’s glorious five goals against Panama in the first half. Then convened to check details with Viv who was preparing the pitch.

The pitching session started at 3pm. 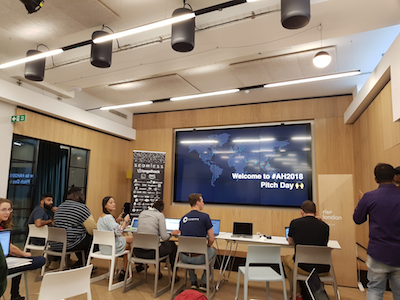 Some of my favourite applications:

A special mention goes to John whose two young sons were involved in his team. This is a great way for them to pick up valuable entrepreneurial skills.

Viv and Justin did a great job of pulling together what we’d created into a coherent story, and we won the IBM Challenge jointly with Paths.

If you have a nagging feeling that your day job isn’t giving you the opportunity to make a difference and build things, you should go to a hackathon. If you do, you will get the most out of it if you are prepared to commit time for the full event. (Make sure it’s one that prioritises building, rather than Powerpoint.)

I learned to see building prototypes in a different way; thinking of components at a higher level instead of coding from scratch: something to do image recognition, something to receive SMS messages and store them in the cloud, a chatbot. IBM Code Patterns give you open source code that you can synthesize. Look at the technologies that are being used and learn enough to work with them.

If you’re thinking of building a startup you should definitely work with your co-founders first. Two days at a hackathon isn’t enough, but it’s a very good start. You don’t know how you’re going to get along until you work together. And when it comes to having ideas, think about your adjacent possible, the set of things you can conceive based on what you’ve encountered so far. And how you can expand this.

I was very fortunate to find some excellent team members to work with. We had a good balance of skills, and collaborated well. I would do it again.