After Angelhack at the weekend I decided to spend more time understanding Blockchain, and coincidentally it’s Blockchain Summit London this week.

These are my notes, focusing on potential uses and some of the challenges.

TLDR: You need Distributed Ledger Technology or blockchain when multiple people are involved and they don’t trust each other. Otherwise you could use a database.

The first talk I attended was an enjoyable session from Valeriy and Tatiana from MyWish which is a platform for creating smart contracts without programming skills.

Tatiana took us through the different smart contract options:

Valeriy talked about a couple of possible contract applications:

Jim Mclean of IBM talked about how blockchain will fundamentally disrupt the way we do business.

Wealth is generated by the flow of goods and services across business network in transactions and contracts. Think about how you control change of property. In some cases (e.g. property) this involves a trusted third party, and it costs £££.

Cash is an asset, but has the challenge of anonymity. Try to go and buy and large value item, e.g. a car, for cash. It’s practically impossible. The dealership can’t take cash. They have to know AML and KYC. 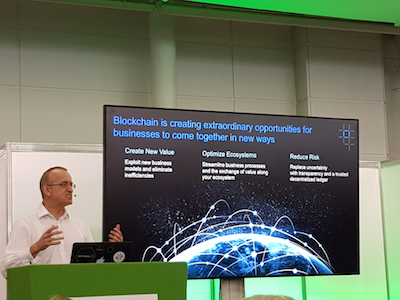 IBM is working with the Hyperledger Fabric project.

The Food Trust programme allows buyers to determine which food from which farm from which shop, is contaminated. In 5 minutes, not 10 days.

Botchain CEO Rob May talked about emerging problems in AI, and Blockchain as a solution

Ref: The AI Revolution: The Road to Superintelligence

With AI, software isn’t changing but the behaviour is (as it learns). 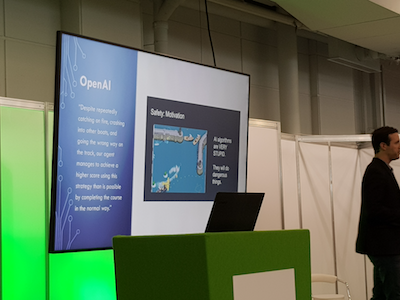 Botchain is a identity system for tracking bots, based on Ethereum.

Houman Godarzi discussed how Blockchain can disrupt the travel and transport industries.

Blockchain is useful when entities don’t trust each other. For 90% of use cases you can use a database instead.

It’s useful for tracking something of value on a journey. Spare parts, valuables; when there’s a change in custody.

Also for codifying agreements. Airport charging rules are complex; every time an aircraft goes through they need to pay for landing and parking (per second).

Certification: Heathrow doesn’t trust me, but I need to prove I’m a pilot.

iatacoin is a project testing the waters of how they can accelerate movement of money from agents to airlines.

Next session, Chris Sherrington from Centrica: Currently data in the energy industry tends to be chunky, with quarterly systems. The industry resolves itself to half hour detail. Distributed generation assets are set to increase by 60% over the next 5 years. There will be 75Bn devices connected in the next 5 years. It’s an interesting market when you start paying people to use your product. 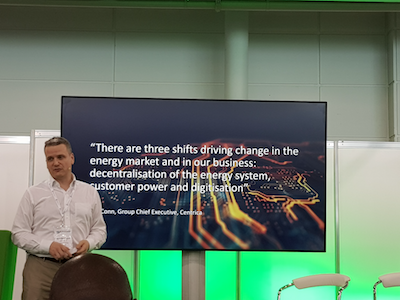 Understanding the Power of DLTs to Better Server Customers

Oracle is launching blockchain as a service soon, based on Hyperledger.

Currently there can be 10 players between advertiser and consumer. Mindshare is looking to make this chain more transparent.

Guy Davis of Blockpass explained how their eponymous product bring supports the Internet of Everything (where humans, companies, objects and devices come together) through Self-Sovereign Identity (SSI). SSI fulfils three basic requirements: 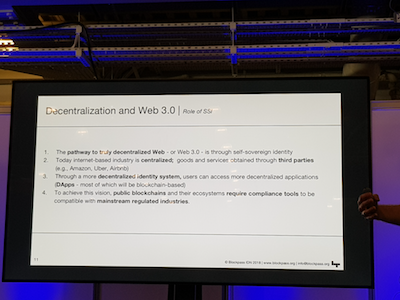 A team at Edinburgh university is working on adding support for Zero Knowledge Proofs, which means the user can identify himself or herself without divulging any personal information to the to other party.

In Blockchain and Social Networks, Where Can It Go? Maxym Tsaryk of Ask.fm talked about Ask.fm reinventing itself as a blockchain-based social network. Ask.fm has had well-publicised problems arising from its allowing anonymous posts. Now the company is seeking to change its model by introducing its own tokens that allows users to ask questions. Maxym stated that the plan was to migrate all users, which would require them to go through a KYC process; those who prefer to remain anonymous will not like this.

Kate Baucherel, who was moderating the session asked Maxym how Ask.fm how they would meet GDPR requirements, particularly the right to be forgotten, when the data is stored immutably on blockchain. Maxym said he’d need to speak to his tech people about that.

Blockchain for Digital Rights Management was, for me, the best panel session of the day. Sammy Andrews, Rob Learney and Marcus O’Dair discussed with Alex Milne Turner current challenges in the music industry and how blockchain might help.

When artists need to be paid, the data isn’t always present, or correct. Even then, it might take a year for artists to be paid. Collecting organisations won’t like the increased efficiency and dis-intermediation that blockchain brings.

Organising song rights is complicated. In addition to a distributed rights database, you can have machine readable rules on how those songs can be used. Some versions of Blowing in the Wind aren’t attributed to Bob Dylan.

Middle men are already being dis-intermediated. Previously you needed a distributor. Now artists are doing deals directly with Spotity.

The Big 3 record companies won’t have a choice to adopt blockchain. Services are already getting lawsuits from mis-attribution.

Rob: a blockchained music solution will arrive. Sammy is excited that there are so many potential applications.