I’d like to tell you about the hackathon I attended this weekend at BCG Digital Ventures in Soho.

Depaul is a charity that supports 16- to 25-year olds who are experiencing homelessness. 80,000 people in this age group experience homelessness every year in the UK. Many of them may not consider themselves homeless … sleeping on a friend’s sofa … while others use Tinder or similar apps to meet people, putting themselves at risk.

In the summer before I went to university I decided that I’d had enough of living at home with my Mum, and I expect the feeling was mutual. I was fortunate that a school friend was living in Earl’s Court at the time, so I slept on his floor.

One of my friends whom I met at AngelHack in June mentioned the Depaul hackathon so I was curious to see how this would be different. Quick summary: it was bigger (24 pitches at the end), no staying overnight, and the charity had spent time defining problem statements for us. (AngelHack framed the challenge more broadly in a number of areas including disaster relief, and creative use of different technologies).

Depaul’s Nightstop was featured in a Channel 4 documentary.

Here are some figures indicating why Depaul’s work is important:

For the hackathon, project areas were grouped into the following areas:

For example, in the context of life projects we were told that Depaul service users sometimes struggle with planning, adopting and implementing strategies for the future. They have aspirations but can struggle to take the first steps to reach these long term goals.

They can also feel overwhelmed when moving into a new home. This means that they often struggle with the basic life skills such as managing budgets or paying bills on time.

Team formation was on Friday evening. I was “the developer” on our team of four. (One more would have been handy.) Developers seemed to be in short supply. Perhaps they were at the Intuit hackathon.

Our team went through a process of problem selection, coming up with ideas for how we could address them and then ranking based on the fit for our team and potential impact.

Our team focused on a solution that would help the Depaul Progression Coach engage with a service user (through a chatbot), sending reminders for tasks to be done and reducing the administrative burden on the coach.

Progression coaches were very busy on Saturday so time with them was limited. However when we did manage to catch up with one, his perspective was very helpful. 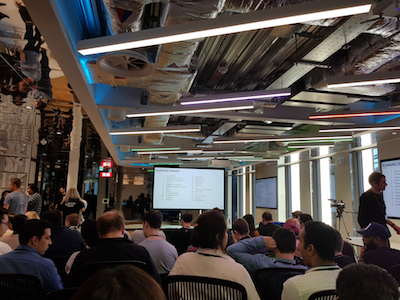 The standard of solutions presented was very high, and included:

The winning entry was Ask Paul, which provides a guided approach to setting and achieving goals. At the time it didn’t stand out for me, but reviewing the slides I can see how well put together it is. Congratulations to Aniekan, Joshua, Charlotte and Jean-Marie! 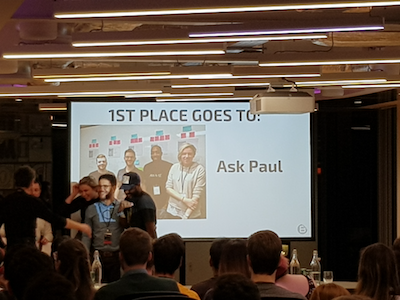 Some feedback for BCG Digital Ventures: If you’re going to ask us to sign an NDA check it thoroughly first. The agreement didn’t define the term “Company” (i.e. the other party). I flagged it with the team at reception, however the majority of the 100+ attendees signed an agreement that probably isn’t legally enforceable.

Hackathons are a really great format for honing skills of problem identification, buliding a value proposition and coming up with a creative solution under significant time constraints.

I’m seeing chatbots / conversational interfaces coming up increasingly as a way of guiding people to information that they may need. Other technologies and integrations that appeared were: ReactJS, AngularJS, Ruby on Rails, Python/Flask, Twilio, MongoDB, Gatsby (React) on S3, Typeform, AWS Lambda.

Knowing technologies like these well helps you to prototype quickly and establish product-market fit.

I enjoyed this hackathon, working with Viv again and new hackathon buddies Philip and Jumana.